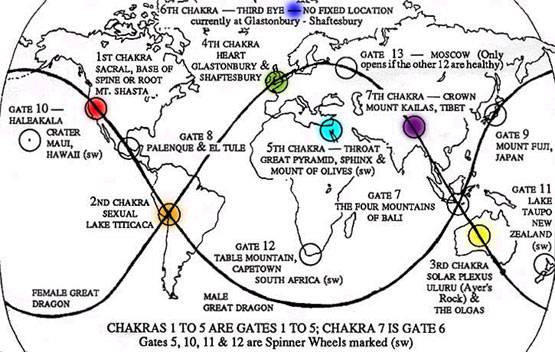 The Earth is not only filled with organic life, but the planet itself is alive--it's a conscious, living being with its own creative and evolutionary will. The earth has its own chakra system as well.

Just like the human energy field of our physical bodies, the body of our physical planet materialized from a universal energy matrix and has a similar subtle structure. The 'peaks' of these energetic structures are considered the major world Chakra points of the earth. Each Major planetary chakra is located in one of seven continents of the world where the energy vortices are the strongest. There are also many minor chakras points that are spread out around the planet.

Like the chakras of the human and animal body, the planetary chakras each have their own particular bandwidth of energy that makes up the complete energy body of the earth. Each of the seven major Chakra centers correspond to particular geographical locations on the planet. The same way the kundalini energy travels its way up the spine from the root chakra point in the body, energy also rotates throughout the planet in a similar way.


Each vortex, or vortice points of the earth, are where energy spirals and flows up and out. They connect with Earth’s chakra points, working together as an energetic grid around the planet. The planetary chakras are considered to be spherical in shape and expand in all three dimensional directions in a spiral motion (either clockwise or anti-clockwise), each with a radius extending for hundreds of kilometers.

The major chakras and earth vortices are located at various sacred sites around the world. These locations are highly charged with the energy reflected by the associated chakra. The locations may vary according to ancient or modern tradition, and some may shift location based on planetary cycles.

One can connect with each of the Chakra locations on earth to receive healing benefits in the corresponding chakra of the body, or to energize or activate a particular chakra. If physically visiting the geographical location is not possible, one can still connect to the earth's chakra points through meditation and visualization of the locations or sacred sites, while focusing on the corresponding chakra of the body.

The First planetary Chakra corresponds to the Root (Muladhara) Chakra.

Mt. Shasta, in California, U.S is considered the Root Chakra of the earth, as well as Mt. Saint Helens (Louwala-Clough) in Washington, U.S. Some also link Mt. Shasta to the 5th Chakra.

This energy center is considered the mostprimal of the earth chakras and is the base of where universal energetic force is said to gather before it becomes life and is released into global circulation. The energy at this center can be likened to geysers which rush to the surface with energy, or prana, much like the kundalini energy at the root of the physical body rushes to the crown chakra.

The Second planetary Chakra corresponds to the Sacral (Swadhisthana) Chakra.

Lake Titicaca, located on the border of Peru and Bolivia, in South America is considered the Sacral chakra of the earth, as well as Machu Picchu, located in the Andes Mountains in Peru. The Rainbow serment, also known as the Plumed, or feathered serpent is found in many sourth american legends and is representative of the kundalini energy rising to the sacral chakra of the planet.

This center has some of the most ley lines on the planet. This space is where primal energy starts to birth itself into form. The earth overcomes entropy through this sacral chakra.

The Third planetary Chakra corresponds to the Navel/Solar (Manipura) Chakra

Uluru (formally Ayers Rock), in the Northern Territory of Australia, is considered the Navel/Solar Chakra of the Earth. Some also link this chakra with Kata Tjuta, and to Mount Kailas in the Himalayan Mountains, in Asia. This chakras role is to maintain the vitality of the Earth.

The giant, monolithic rock found at this center is home to many of the Dreamtimes legends of the native aborigical people of the land. Kata Tjuta is considered Uluru's sister rock formation.

The Fourth planetary Chakra corresponds to the Heart (Anahata) Chakra.


Glastonbury, Somerset and Shafesbury, Dorset in England, located in the British Isles bordering Scotland and Wales, in Europe. are considered the Heart Chakra of the earth. This chakra is also sometimes associated with Maui, in Hawaii, U.S. The Haleakalā volcano on Maui matches the Schumann Resonance at 7.8 cycles per second, the same resonance of our hearts and the natural state of Earth.

This center is the "world's heart" and is the holy grail of the planet. This area is well known for its high level of crop circle formation.

The Fifth planetary Chakra corresponds to the Throat (Visdhuddha) Chakra.


The Great Pyramids of Giza near Mt. Sanai, Egypt, as well as Mt. Olives, Jerusalem and the Middle East is considered the Throat Chakra of the Earth.

This center is the "voice of the planet" and is the only planetary chakra that does not exist on a ley line. It is the exact center of the earth's land mass.

It is said that the Middle Eastern conflict is due to the cries of the earth calling for help and voicing an urgent message to awaken humanity. It is essential to the health and healing of the planet that we all open our hearts and unite with one another in peace and harmony.

The Sixth planetary Chakra corresponds to the Brow, or third eye (Ajna) Chakra.

This chakra is often referred to as the "Aeon Activation Center" and can shift location every few hundred years. Currently, Western Europe is considered the Brow Chakra of the earth. It's also associated with Kun Lun/Gobi-Lop-Nor Deserts, in Mongolia, as well as Kuh-e Malek Siah, Triple border of Iran, Afghanistan and Pakistan.

This center is a portal to extra-dimensional energy that is entering our world, similar to role of the pineal gland of our "third eye" or brow chakra. This space represents other dimensions and realities.

The Seventh planetary Chakra corresponds to the Crown (Sahasrara) Chakra.

Mt. Kailas, located in the Himalayas in Tibet (also associated with the navel/solar chakra), as well as Mt. Cook in New Zealand, is considered the Crown Chakra of the Planet.

This center is known as the "roof of the world' and represents highly developed consciousness. It is representative of Divine Planetary Will and spiritual destiny.

Healing The Chakras With Herbal Remedies

Each plant carries a vibrational frequency that corresponds to one of the seven chakras. The vibrational qualities of each plant will assist in clearing, balancing and energizing your aura and your chakras. {more}

You can receive the gifts of plants by drinking herbal teas or elixers or by using plants or flowers for aromatherapy; consuming certain edible varieties of plants or eating more raw fruits and vegetables; and by simply acknowledging the blessing that nature brings. Taking the time to sit or walk in nature to admire the beauty and absorb the tranqulity it brings will benefit your mind, body and spirit.